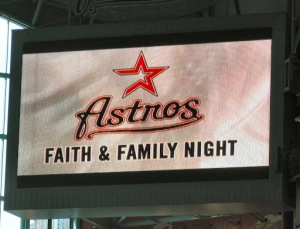 Yesterday I went with my friend Candie and her two daughters (Renee & Samantha) to Faith & Family Night at Minute Maid Park. We volunteered for a group that specializes in bringing faith events to sports venues. After we did our assignment (we passed out cards for people to sign up for drawings/prizes) we were free to stay for the game (they gave us great seats).

Lance Berkman gave his testimony before the Jeremy Camp concert and there was a variety of vegetables (Veggie Tales) walking around the concourse during the event. Astro usher, Alfred, suggested I’d get a good picture of Mr. Camp via the big screen, and it turned out pretty good. 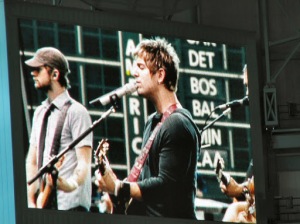 Jeremy Camp
We had an hour or so to kill before the game, so we took some pictures.

Renee, Candie, Samantha
To put it mildly, Candie and her daughters are HUGE Astros fans. They go to as many games as they can and when someone at work e-mails that they have tickets up for grabs, Candie “quick draw” is usually the one who gets them. In fact, today she’s at a game and has seats in the Crawford Boxes in left field where two home runs have been hit.

Just about every game Samantha (below, left) and Renee (right) go stand at down at the bottom of the stands along first base/right field and they have been fortunate enough to get some really great autographs on their baseball gloves. Tonight was no exception. They waited patiently for an hour or so and would call us when they wanted pictures of players.

Adam Everett came out and ran on the field for a few minutes to show everybody how he’s coming along with this broken leg. It looks like it’s healing nicely and I hope to see Adam back at shortstop again soon.

Carlos Lee always looks like he’s having a good time.

This one is for Candie. 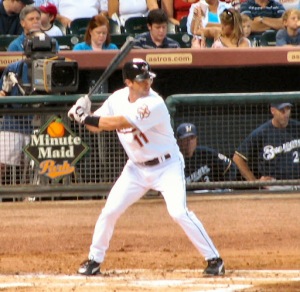 Today was the 3,000 hit ceremony for Biggio, and since Candie’s at the game, I hope I get to hear all about it. Biggio had a homerun today and I watched part of the emotional dedication before the game. At least he’s going out well. 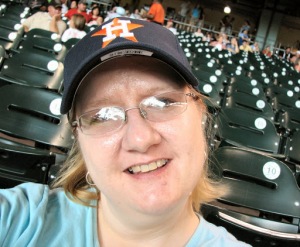 We were ahead 4-0 when we left in the sixth inning, but alas, the Astros lost 7-4. I had a great time, though, and I want to say a special thanks to Renee for allowing me to borrow a hat. 🙂

Leave a Reply to The Granniss Family Cancel reply