I watched a good portion of the of the opening ceremonies from Beijing this evening and it was spectacular! Whatever happens from this point on, China can be proud of this moment. Some of my favorite parts were the tai chi and the sphere and the joyous faces of all the athletes.

The best part, by far, was this: 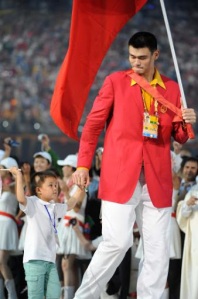 We all know Yao Ming is a superstar in China. I’m proud he’s a Houston Rocket. What touched me most, however, was the 9 year old Lin Hao waving his tiny flags next to the 7’6″ NBA star.

Lin Hao escaped the rubble of the May 12th earthquake that devastated the Sichaun province. What makes him remarkable is that, after escaping the rubble that entombed 20 of his 30 classmates, he risked his life to go back into the rubble and saved the lives of 2 of his peers.

He probably is too young to have even thought about the danger. The commentators said, when asked why he ran back into the rubble, he said he did it because he was a leader in school and it was what a leader would do.

I could expound on that, but I believe those words say enough. I hope this little boy grows into that character and can be a bright light in China’s future.