I don’t think I will ever forget this day.

As I sat and watched our 44th president being sworn in this morning, I couldn’t hold back the tears. The day was laced with historical moments, including being sworn in with the same Bible as Abraham Lincoln.

I watched as Obama took the oath of office and the country (most of it) rejoiced. I don’t know what will happen in the next four years, but my hope is that this new direction will be a good, productive one. 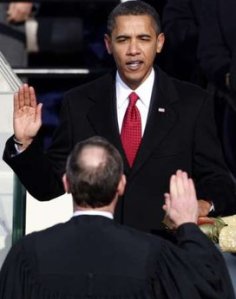 One thing I did hear broadcast today resonated with me. A woman who was attending the inauguration with her daughters said that she talked to her daughters about why today was so important, why the election of someone who represents a different ethnicity than the previous 43 presidents was historical and significant. Her hope is that when her daughters have daughters of their own and they recall their memories of this day and explain why this day was laden with historical significance, that her granddaughters will wonder why having an African-American president is a big deal.

My heart echoes that hope and I look forward to the day when we’re all just Americans no matter what our skin color or heritage is. May that day come sooner than later.