My whirlwind tour through breast cancer treatment continued this week with the beginning of radiation therapy. Nothing ever really prepares a person for what lies ahead, no matter how much reading, studying, asking, praying or preparing is done. What can really be done to prepare for fatigue and nausea? Not much. What prepares you for the command to not wear a bra or deodorant and the self-consciousness and discomfort that goes with it? Not much, especially when the temperature gauge reads 100 degrees every day.

So I cope, as usual, with a camera or a pen in my hand.

Monday, June 6, I went in for my “fitting” for the form they make for the radiation table. They put me in this machine (which is a CAT/MRI type machine) and took some pictures. 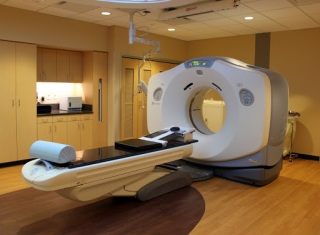 The entire facility is practically brand new and the staff is very friendly. They welcome questions and give you answers in any detail you like. They rolled me back in to the machine and I saw this sign that told me not to stare into the laser beam. For anyone that knows me, my eyes see signs like this and my brain says, “you know you HAVE to look.”

I refrained, however, because I know that lasers can hurt the eyes, and Lord knows I need them for many things, including taking photos.

The master of the MRI domain, G, lined me up on the table so he could get the readings to make the mold that would hold me in place. Then he marked on me with permanent marker, and then stabbed, rather, tattooed me in three strategic spots that they will be using the next six weeks to line me up with the laser. I have a tattoo, and that one didn’t hurt at all. In G’s defense I’m not sure this can be done any more gently to make the dot, and he even said it would sting like a mosquito. I’m not sure what mosquitoes he’s come in contact with! He did the second one and it hurt so bad, had I not been holding a foam doughnut above my head, he said I looked as if I wanted to punch him. G is very observant.

This Monday, the 13th, I had a final fitting for the foam form and they wrote all over me with permanent marker for further guides to line me up on the radiation machine. It felt like they were playing tic-tac-toe on my stomach. I was giggling because the marker tickled and someone made a comment about me being ticklish and Sassy (they like the tattoo). They put stickers over the marker so it won’t wash off, so I have many lines and X’s in addition to the three tattoo marks. I mentioned that if they did that again, I wanted an X in the center square.

I asked V (radiation team) if I could take photos and explained I wanted to chronicle my journey in pictures. He agreed that as long as I didn’t take photos of people I could shoot away. I was very grateful and the next day I took my camera around and took pictures while I waited. Taking photos is very therapeutic for me.

This is one of three dressing rooms in the waiting room. Once you get called back there, there usually isn’t much waiting until they come and take you to the radiation chamber.

The radiation chamber is behind this door, which is at least two feet thick.

The radiation machine has lots of pretty lasers as well.

I have no idea what any of this means, but they do, which is the important thing.

I’m actually on the table less than ten minutes, but it’s interesting how much happens to cells in that amount of time. In 5 treatments I can see my skin reddening, so who knows what is happening under the skin’s surface. After the third treatment, I have experienced a period of nausea, and by the end of the day I’m wiped out.

One week down, five to go. I’ve read the side effects grow worse as time goes on, so that’s on my mind as I try and rest this weekend. It’s so difficult for me to allow others to do things for me, but I am grateful for the help I’ve received so far.

I was asked if I’d been directed to a counselor through this ordeal. I haven’t, but I think that’s because I explained to my oncologist that I am surrounded by a wonderful community and am blessed to have them around me – I have a lot of ears to listen and many shoulders to cry on. I’ve never been good at pampering myself but I’m trying to do that, and to allow others to pamper me as well.

I appreciate all the thoughts and prayers on my behalf. Please pray for the others I come in contact with daily. I am one of the few getting treatment who hasn’t been through chemo already. Some have good attitudes, some are already defeated and going through the motions. I am also not the youngest one there. Some bring their kids now that summer break is here and they wait while their precious mommies or grandmothers get treatment. All of them have already learned the art of waiting for an indefinite amount of time, somewhat resigned to this routine.

Also pray for the staff. I have never been on a medical journey like this one, but I am amazed at the compassion and smiles I receive every day. The receptionist is so chipper and kind I want to hug him and tell him how much his smile and spirit mean to me. Maybe over the next few weeks I will.