Sitting here on New Year’s Eve again, watching football, burning my bayberry candle (“Bayberry candles burned to the socket, bring health to the home and wealth to the pocket!”) I am once again pondering my One Word for the new year. For 2018, it was, “Adventure.”

I did not do as well chronicling my adventures this year. I am without a laptop at home and hunting and pecking with fingers or a stylus on the iPad didn’t seem feasible. I now have a decent bluetooth keyboard and hopefully that will help with my apathy.

From adventures in Disneyland to the skyward reaching pines of Arnold, California, I thoroughly enjoyed this year. I embraced many new things and sought to treat the ordinary as adventures in themselves.

I had a lined piece of paper on my coffee table with 23 words that I started for my One Word search. The last one is the one I’m choosing for 2019. The other 22 will have to wait.

In 2019, I will carry forward all I have imagined and will imagine and execute new dreams and plans. Can you imagine? I can.

I’ve wanted to do this for a long time. Whenever I’ve asked a hairdresser to do it, they’ve balked. Their definition of femininity didn’t allow it.

Know that I LOVE IT.  If you don’t, that’s ok. I didn’t do it for you. It’s the most freeing thing I’ve done with my “look” since I cut it shorter in the first place.

It’s so freeing. I have heard my whole life, from people who mean well, how “pretty” I’d be if I a) lost weight, b) was more demure, c) had long, high-maintenance hair.

I don’t need to be “pretty.” I’m already beautiful.

I truly, madly, deeply love photography. I love being a photographer. I feel alive in the creative process from beginning to end.

For the last couple of years – through my ups and downs with cancer and hypothyroidism – I lost my creative drive.  Most people do not realize how much energy creativity takes, especially for someone who has to measure out, sometimes selfishly, how she spends her time and energy.

I decided it was time to reclaim my creative drive and ramp it up.  I have been participating in the FMS Photo a Day, a photography challenge that has a daily word (a color, food, “right now,” etc) you must snap a photo and post.  I asked some friends to join me in October’s challenge and it’s been interesting to see “orange,” “stuff,” and “good vibes,” through their eyes.

Today, my friend Kim picked me up this morning and we headed out to parts unknown, to me at least.  We ended up in small towns like Shiner, Flatonia, Schulenburg, and LaGrange, Texas.  We’d occasionally stop, snap some photos, and continue on. It was a perfectly creative day with a good friend. I can’t ask for a more creative and satisfying Saturday. 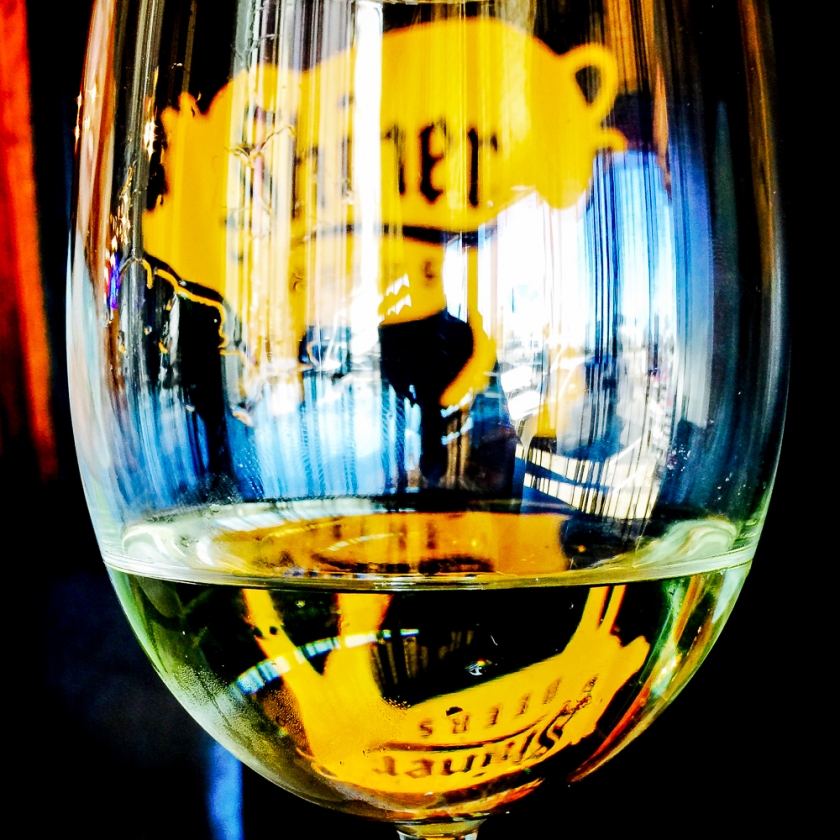 I can feel the creativity boiling in me now. For example, as Kim and I were talking, I noticed this reflection in her wine glass, stopped, snapped the photo, and continued talking. It’s one of my favorite shots from the day. 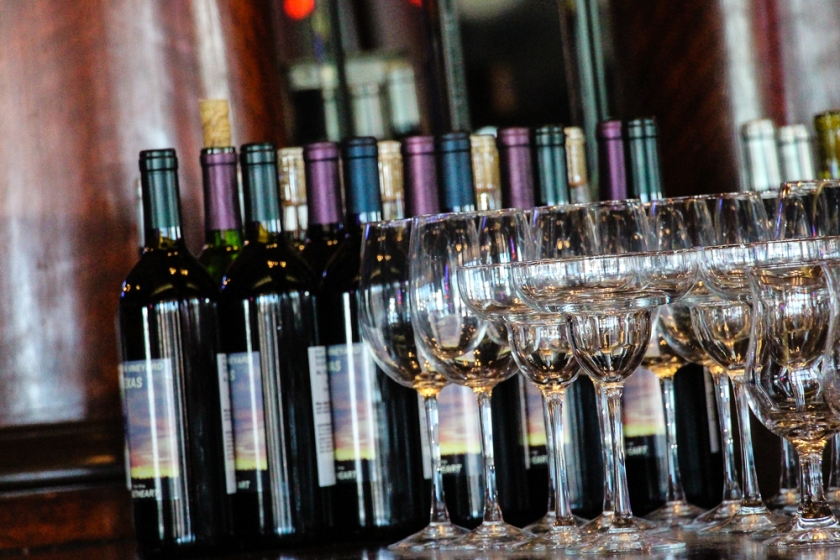 Grateful for days like this! Getting my creative mojo back one day at a time.

Today one of my coworkers, who usually checks the news around noonish, blurted out, “Prince died!” I went on the internet immediately to verify.  It was true.

Ironically, I had spent the morning searching for and finding the video of a coworker singing, “Purple Rain,” during karaoke at the company Christmas party in 2014 to show one of the interns. She had just received them when I walked back to her department to give them the news.

After the denial wore off and other coworkers took their turns singing parts of “Purple Rain,” and sharing random thoughts and memories of Prince, I couldn’t get the song, “Purple Rain,” out of my head – and it’s not even my favorite Prince song.

My 2nd favorite Prince song is largely unavailable – it’s “Most Beautiful Girl in the World,” from his 1995 release, The Gold Experience.  The song is not only beautiful and inspiring, it shows Prince’s amazing range.  I also have some of his recent funk and random jazz cuts in my collection.  He also wrote songs that he didn’t sing himself, like Stevie Nick’s, “Stand Back.”

So much talent and creativity packed into one mind and life.

Super Bowl halftime show – AMAZING.  Pouring rain, and when asked if he was going to perform in the rain, he said, “Can you make it rain more?”

My favorite song, though, is “When Doves Cry,” from his iconic Purple Rain album.  I was a freshman in high school when it came out, and the lyrics, which I sang with all my heart and pain, resonated with me.

When I came home tonight, MTV had cleared all their normal programming to show Prince videos and the movie Purple Rain.  I watched it in its entirety, which I haven’t done in years.

It’s odd, watching an iconic movie filled with such iconic music and persona when the force behind it all is no longer earthside. The performance seems fuller – as if the last breath of the soul finally made its way to the celluloid.

As I expressed in my post WHEN YOUR CHILDHOOD STARTS DYING, the grief is different, but it’s there in every note, video, and other expressions of sadness. Even now, as it appears that Prince’s death might (might) be drug related or suspicious, that doesn’t lessen his impact on people’s lives or my life through his art.

I believe there’s a fine line between creativity/genius and insanity or otherworldliness that is nearly impossible to walk and nearly impossible to understand or fathom. I think that line is what scares me the most when I find myself at my most creative and expressive. Artists like Prince (and many more) inspire me to walk that line regardless of the mystery and to trust the process because no matter what happens if we obey the muse, we bare our souls and may inspire, encourage, challenge, and change others around us.

As people around the world listen, watch, and remember Prince tonight, we will all remember that we have gathered together to get through this thing called life – and his genius was a big part of it.

RESOLUTION: a firm decision to do or not to do something. – random online dictionary

INSANITY: doing the same thing over and over again and expecting different results. – Albert Einstein

This year has been full of challenges, difficulties, and successes.  Two back-to-back surgeries and learning an entirely new job this year has left my well pretty dry right now, but I’m doing all right. The surgeries were worth it. 55 pounds lost, no helter-skelter roller coaster of emotions and the new duties at work have made today much better than this day last year.

I will go on record saying that, while this was a tough year, it was a good year. I do not do resolutions anymore, but I do have four goals for 2014. All hopefully achievable, all very necessary.

GOAL #1:  NO SURGERIES! This, I hope, is completely achievable. I enter 2014 in the best health I’ve been in for the last 20 years. While epidurals are great, morphine is awesome, and finding out who really has your back when you are medicated and laid out flat on it is educational, I’d rather not have any major medical problems to deal with in the coming year.

The goal here is to just take as many pictures as I can. Between the surgeries, getting healthy, work, and having my camera stolen, I didn’t take hardly any photos (in comparison to other years) in 2013. Any I did in the first half of last year are still locked away on my backup hard drive. I hope to launch my portfolio on 500x soon and I need to beef it up a bit. So if you see me walk into a bathroom with my camera tell me I need a break.

GOAL #3: HIT MY GOAL WEIGHT I had RNY gastric bypass surgery on March 25. In 9 months, I lost a whopping 55 pounds. After my first surgery this year, my weight went up to 251, the highest it’s ever been. On the day of my bypass surgery, I weighed 238 pounds. That’s the weight I measure by. My goal weight is 140-145. That’s what I weighed in high school. I will see what weight my body settles into. Meanwhile, I will exercise and eat right and do my part. The second half to the goal is always more difficult than the first. This is when I need resolve most.

GOAL #4: MORE “ME” TIME Because of all my surgeries, health issues, and work, I did not have a lot of “me” time.  In 2014, I am going on vacation and taking more short trips (with the camera, of course) and working on photography (which keeps me sane). I hope to be writing more, too. This all takes time with a recharged me. I’m an introvert, so don’t take it personally when I disappear to recharge. I will be a better me if I do.

That’s it. Anything I accomplish outside of these four goals is just gravy.  I find I accomplish more when I keep it simple and these goals seem pretty simple to me.

Happy New Year! May your goals bring you the accomplishments you desire.