This is my first Christmas outside of Houston in at least a decade. We’re in San Angelo and it’s bright, clear and cool here. Some of the youngins are out on a Sonic tater tot emergency, and we have various stages of relaxation going on from naps to blogging before we head out to the Christmas Eve service.

Yesterday was the official Christmas celebration featuring the Stocking Tree. Instead of buying large gifts for each other, we buy stocking stuffers… and stuffed these stockings were. To the members of the family that couldn’t make it to town, their stockings are stuffed then mailed.

My stocking was stuffed with everything from a journal, perfume, and candy to a silver piggy bank. One of the kids got a washcloth that had been compressed to the form of a 3 inch snowman. Just add water. Another got a “smencil” which is a pencil that is scented like peppermint. Lots of fun items were exchanged.

The stocking tree is now bare and the youngins are back from Sonic. The house is full of chatter and the sounds of remote control cars and kids slurping drinks from Sonic.

I’ve had fun playing with the kids. I was instructed by one of the parents that bleeding but no tears was nothing to worry about, but bleeding with tears might be cause for concern. I had to ask because when kids are falling down and jumping out of trees, sometimes injuries occur. Then we played games, the most unusual of which was “you’re going to be the rich old mean lady who makes us clean her house.” I paused and looked at the kids, then was told by a the cutest little boy with big blue eyes, “it’s just pretend. I’ve never known you to be violent.” 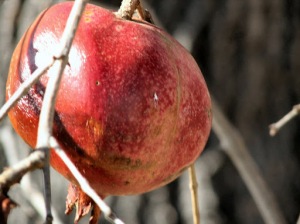 We picked too ripe pomegranates and chucked them against a tree, then helped Pop pick pecans out of the yard. Apparently, the rounder and bigger the pecan, the better the taste, so those were collected and carefully guarded. Pecan stomping began and I had some great tasting pecans while chasing kids in the yard.

Tomorrow I have to get in the car again and make the long drive back to Houston. I hope I don’t feel as deliriously tired as I did when I arrived Saturday night/Sunday morning. Jene’ and I were slap happy and I stung my lip with the lid of a water bottle because I was so tired (don’t ask). Other than the wind, the drive up was pleasant, except for that deer who tried to share the road with me. She looked as surprised to be in the predicament we were in as I was, but she kindly moved before I had to slam on the brakes.

All in all, it’s been a good trip, one that I hope to build on in the future.