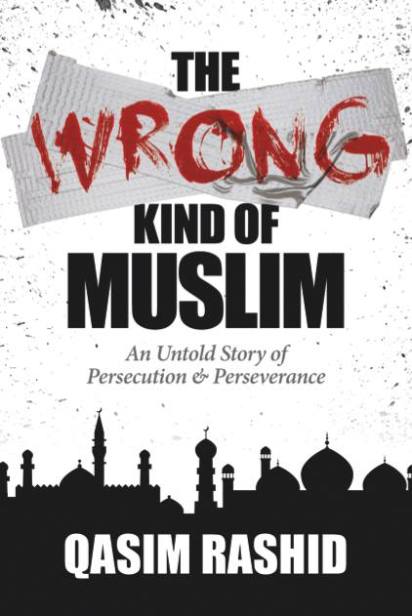 A few months ago, I was Twitterduced to Qasim Rashid by my friend Sharon. I noticed immediately he was different than many Muslims I encounter on social media. He was peaceful, kind – especially when attacked, and spoke intelligently, not just about his faith, but also others, including my own.  When I heard he’d written a book about his faith journey, I couldn’t wait to read it.

I have lived my life in the Christian faith, but God is big enough and doesn’t need me to defend Him, club others on the head to prove my point of Him, and my mind can remain open to dialogue, befriend, and journey with those who have a different interpretation of Him.

As an American often surrounded by Islamaphobes (and homophobes and just about every other “phobe” fueled by ignorance, fear and the refusal to change) I find myself in conversations where I have to choose my words wisely lest I get drawn into an angry, “but I have to be right or my faith isn’t the best/real/certain,” arguments.

I read The Wrong Kind of Muslim for many reasons. First and foremost was to gain understanding into a world in which I have very little knowledge. Qasim not only educates  about his world and reality, he took me on a very detailed walk through it. Instead of a stream of dry information, I was invited to meet Qasim’s family, and discover his family history as he visited Pakistan, the country of his birth.  The stories he tells are real, and the people killed, tortured, wounded and persecuted are real.

As a Christian, I will admit I didn’t know much about Muslims beyond Sunnis and Shias before I read this book. Of course, the media focuses on the most violent, the most insane and most brutal parts of the Islamic community, just as it focuses on the most violent, uneducated, and ridiculous parts of the Christian community.  If one is content to be spoon fed by the media and not think for oneself, the foundation for prejudice and judgmental reaction is solid, no matter what your belief system is.

Qasim Rashid is an Ahmadi Muslim, a peace-living, peace-loving branch of Islam. They live by the code of, “Love for all, hatred for none.” Many Christians (and others) want to believe that all Muslims are evil so badly they can’t wrap their brains around such a statement. I am so grateful I was able to do so.

Depending on which side of the altar you sit on Sunday, be it in a liberal church or a conservative one, many Christians feel that their religion has been hijacked – and that’s just politically and ideologically.  Imagine having your religion hijacked by people who are hellbent on killing everyone who doesn’t believe as they do? Qasim has lived in that world his entire life.

I cried as I read about children dying in Mosque attacks. Muslims attacking Muslims. The peaceful responses of the Ahmadis. I was angry when Qasim was. I was sad when he was. The further I read in the book, the more open my eyes became.

I finished reading The Wrong Kind of Muslim with a new perspective on the Muslim world.  This book is for all – people of any faith seeking to understand a different religion, Muslims seeking to take back their faith from extremists, and for those, like me, hoping that knowledge can build bridges of understanding.

Knowledge is the light that burns prejudice to vapors.  Thank you, Qasim, for such a well written, informative book! I look forward to reading more of your work in the future.

This book is available everywhere, including a Kindle edition on Amazon. I would encourage all to read!